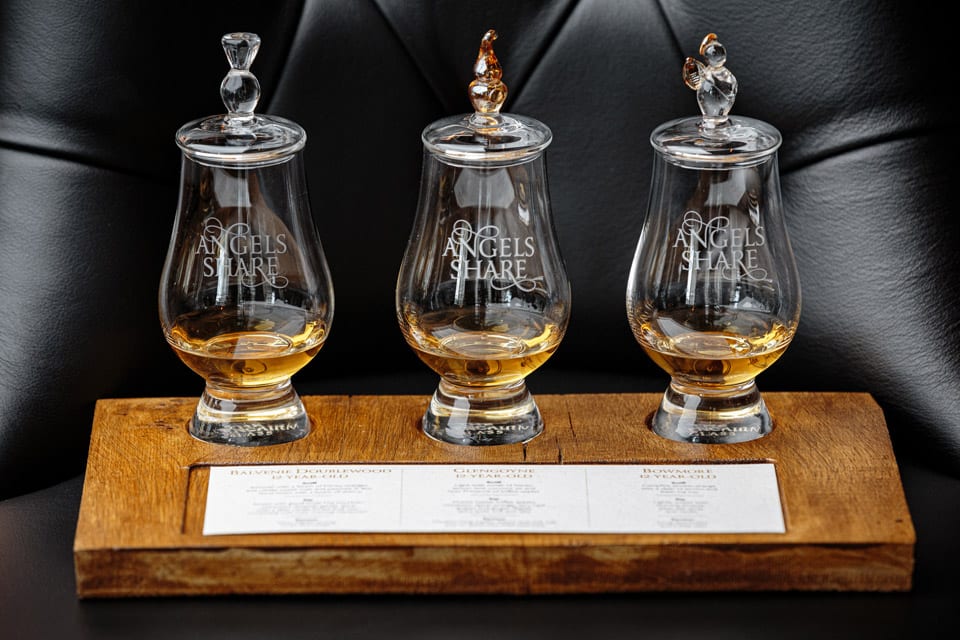 We are excited to have launched Angels Share Hotel, Bar & Restaurant Whisky flights!

Whether you know it as, Uisge beatha, Usquebae or the Water of Life, Whisky is an important part of Scotland’s heritage. Also know as Scotch, we can trace it back to the beginning of the 11th century and like the drink itself, it is fascinating and complex.

The first record of Whisky ever being made in Scotland, appears in 1494.  Friar John Cor of Lindores Abbey in Fife was granted the King’s commission to make Acqua Vitae, Latin for the ‘water of life’.

Originally, only producing a small batch of 500 bottles, bring that forward 500 years, and Whisky has turned into one of the world’s, and Scotland’s, biggest exports.

Today, you will find Scotland’s 109 distilleries, guard the secrets and ancient traditions, that have made Scotch Whisky famous across the globe.

The name “Angels Share” itself refers to the small amount of alcohol that evaporates out of whisky barrels during fermentation.

To honour this, we have created a range of Whisky flights, that pay homage, to the 6 Whisky regions of Scotland – Highlands, Island, Speyside, Lowlands Islay & Cambeltown. Each Whisky made in the regions, follow the same process, but the end product has a distinct, key difference from its neighbour.

Our Whisky flights have been designed, to take you on a journey around each region and focus on the characteristics, that make it unique.

There is a Whisky for everyone, so whether you start with the Lowlands and immerse yourself in the sweet, subtle, citrus tinged tones of the area, or, prefer something with more of an impact, like our Highland Whisky’s, which are heavier, drier and consist of heather and nutty tones, you will not be disappointed.

You will also find the opportunity to explore some of our more exclusive ranges, with Whiskies such as Johnnie Walker King George V, which was made to celebrate the Royal Warrant being bestowed upon the company, by the monarch and which is one of the rarest stocks made today.

You can also delve into some of Scotland’s finest flavours, which we have expertly paired with chocolate to bring out a spectacular taste sensation.

For more information, or to book one of our Whisky flights Angels Share Hotel, Bar & Restaurant, contact our sales team on 0131 247 7007 or email salesteam@angelssharehotel.com