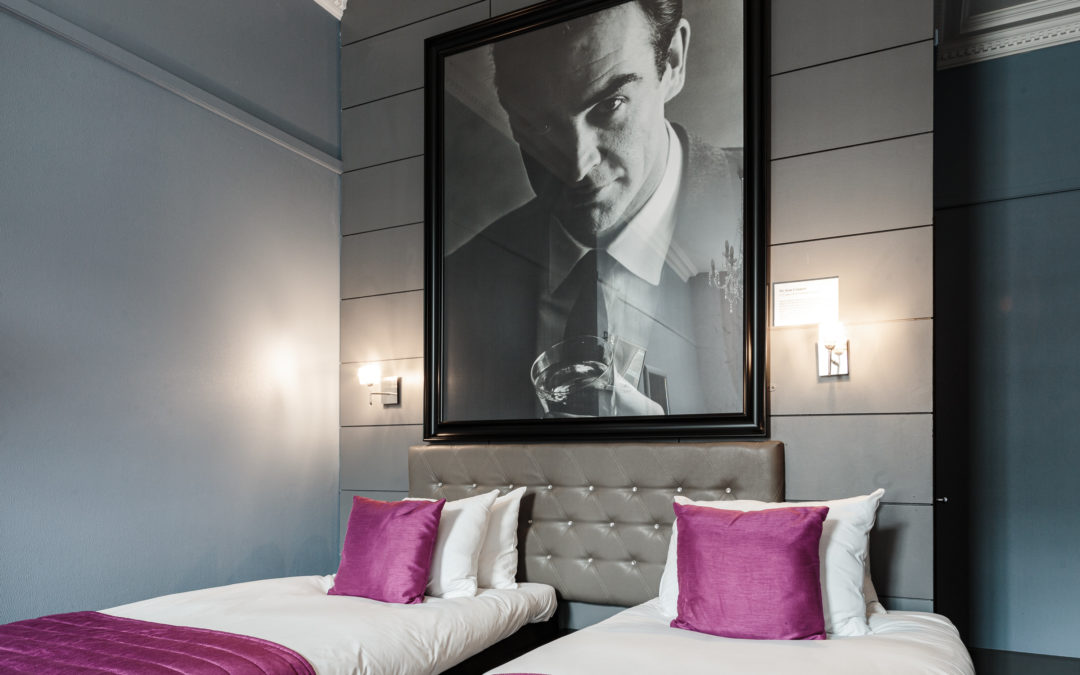 Angels Share Hotel, Bar & Restaurant is very proud of our great city of Edinburgh and some of the local talent it has produced!  Not only is Edinburgh steeped in history, hosts a wealth of diverse festivals, offers world class attractions to visit and a great city to explore the best of Scotland, it also has been home to some pretty famous people! Some of these famous people listed below we have bedrooms named after here at Angels Share Hotel.

Sean Connery – Way before Daniel Craig some might say this man is the ultimate and most iconic James Bond.  Not even Moneypenny could resist his charms and he appeared in 7 of James Flemings spy hit thrillers.

Chris Hoy – What a man!  He’s an eleven times world champion and six time Olympic champion!  With a total of seven Olympic medals, six gold and one silver, Hoy is the most decorated Olympic cyclist of all time. Hoy became Scotland’s most successful Olympian… go Chris Hoy!  He also has a two gold Post Boxes to commemorate his success located on Hanover Street and in Hunters Square.

J.K. Rowling– Born in Yate, Gloucestershire, Rowling truly is the ultimate rags to riches story who has made Edinburgh her home. She is the United Kingdom’s best-selling living author, with sales in excess of £238m. The seven Harry Potter books stole the hearts of millions of book lovers and went on to become massive movies.  J. K. Rowling wrote many of early novels in the Elephant Room Café

Ian Rankin – Born in Fife, Rankin now lives in Edinburgh with his family and has penned some of our city’s best crime novels including the hit collection Inspector rebus.   All the novels involve murders, suspicious deaths or disappearances, with Rebus taking on the task of solving the mystery and many of which are set in Edinburgh.

Irvine Welsh – Born in Leith of Edinburgh, this novelist has produced one of the most iconic Scottish movies of all time, Trainspotting.  To date, Welsh has published eleven novels and four collections of short stories and with the movie Trainspotting & Trainspotting 2 both filmed in the city starring Ewan McGregor!

Bay City Rollers – Yea we sang Shang-A-Lang and we ran with the gang! This tartan sensation from Edinburgh were worldwide teen idols in the 70’s and loved there tartan troosers!

Shirley Manson – She’s best known internationally as the lead singer of rock band Garbage. For much of her international career Manson commuted between her home city of Edinburgh and the United States to record with Garbage.

Alexander Graham Bell – Fascinated with sound and speech, Alexander Bell spent the early parts of his career experimenting with various inventions which eventually led to the invention of the telephone. Without this engineer we might not have been in an age where we have Apple iPhones or Android phones (Gosh!)

Our bedrooms at Angels Share not only feature some of the above famous people of Edinburgh, we also feature 31 iconic Scots actors, musicians & sportspeople alike! Why not book a room and see for yourself!